Eiyuden Chronicles: Rising is something of an oddity. It’s a prequel to Eiyuden Chronicles: Hundred Heroes, a game due out next year, which is the spiritual successor to Suikoden, an RPG that saw enormous Kickstarter success, birthing the extra title I’m reviewing today. Rising, though, is a concoction of action, and simulation, with a splash of Metroidvania.

From 505 Games and developer Nastuma Atari, Eiyuden Chronicles: Rising is meant to introduce players to the world of the upcoming RPG, introducing a few of the characters from Hundred Heroes, while building up a small town that will also eventually feature in the incoming adventure . But, does it stand on its own as a game you should play today?

You play as a young adventurer called CJ who is on the search for a treasure known as Lenses. Her father was also an adventurer and found the biggest Lens ever discovered, so, CJ wants to carry on the legacy and become a treasure hunter known across the land. At the beginning of the game, she stumbles across the burgeoning town of New Nevaeu, with plenty of townsfolk in need of a helping hand.

The town has a few nearby locations full of treasure to plunder, but anyone hoping to explore them needs to earn an adventurers license, which can either be bought for astronomical amounts of money, or, you can fill in a stamp sheet, by earning stamps every time you attend a villager. Help someone build a new stall, grab some materials, reunite them with a lost cat, and so on; the townsfolk need plenty of help to bring the village to life, and they only have more tasks as the town slowly fills up with shops and new citizens. 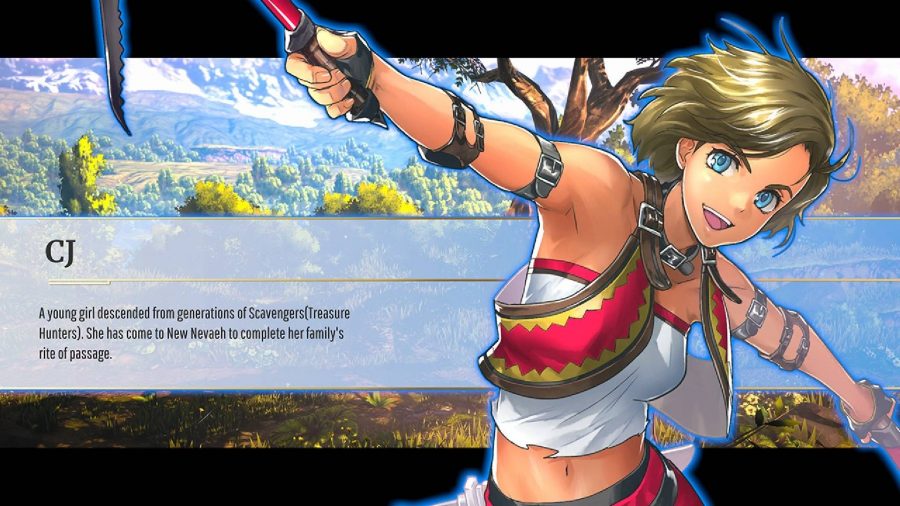 The gameplay loop is a great idea. Explore dungeons, grab resources, head back to town, use the resources to build shops and equip better gear, and use better gear to explore even further in the dungeons. It almost makes me think of Moonlighter, where the split in gameplay gives greater meaning to resources you collect and makes the action that much more impactful for it. Sadly, the execution here isn’t quite on that level, as several small issues accumulate to make a game that instead stretches out its few disparate gameplay modes to create a wholly stagnant experience.

First up, as you explore, you use your pickaxe to attack enemies in real-time combat. Before long, a giant, greatsword-wielding, warrior Kangaroo called Garoo join you, and eventually, a magic-user called Isha also folds into the party, adding ranged damage to proceedings. The main issue here, is that combat feels fairly slow and unresponsive. There are a good few moments between hitting the attack button and seeing anything happen, whichever character you use, and it leaves the combat feeling underwhelming to me throughout. 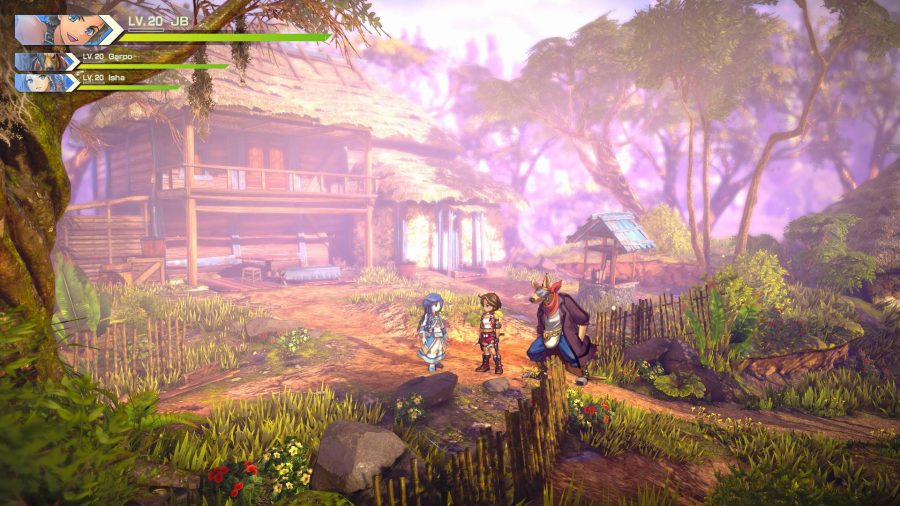 Now, the combat isn’t particularly involved, so this is almost forgivable. Enemies don’t do much of interest other than the odd boss fight, and, eventually, you get the chance to link together attacks from each party member, swapping between them every few strikes to chain together a devastating combo. It’s great, but again, it feels too floaty and lethargic to be satisfying. The action is also held back as weapon power is dictated by incremental improvements buried under menus and busywork, which I’ll come back to later.

The town building is the next big part of the game, and fixing up New Nevaeu from a stack of sticks and some nice ideas, to a bustling community, is somewhat lovely to watch. Crucially, Eiyuden Chronicle: Rising is a beautiful game to look at, with the player moving across a 2D axis, while a dynamic diorama of foliage, running water, and moving buildings pass in front and behind CJ as you move. To create most buildings, CJ must grab some resources or complete a task, which often results in the vendor opening (such as an item shop, a blacksmith, a weapon shop, etc) and CJ receiving another stamp for the stamp book. 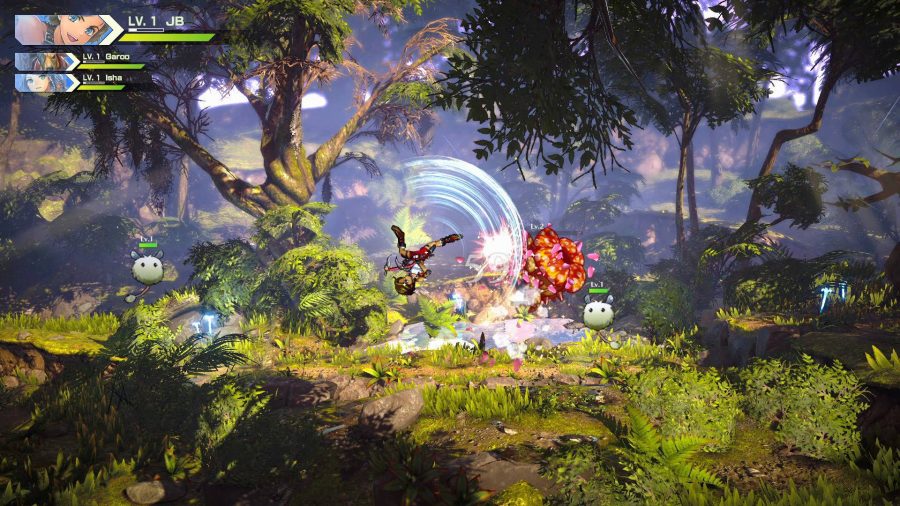 What drags this down is the sheer monotony. Dialogue is slow and clunky, movement feels too leisurely, and heading out to grab resources one by one, only to get sent out on a similar errand immediately after – to the same area – feels pointlessly drawn out. Unlocking the new vendors slowly adds new mechanics like the aforementioned abilities to improve weapons, the chance to buy items, and eventually, the improvements to weapons needed to break obstacles and explore new areas. I know gameplay elements need to be added over time, but a good chunk of the around 20 hours needed to complete this title are spent introducing new elements that eventually feel unnecessary.

The sheer number of times you go out to grab a single thing, then slowly shamble back to listen to bland dialogue (with no voice acting) only to go out and do the same thing is tedious. I don’t want to spend more time in menus or reading dialogue than I actually spend exploring and in combat. You’re also only pushing forward your exploration in the most miniscule ways. Sometimes you simply add one extra room to your map, before having to go back and listen to the blacksmith for a few minutes until you can go out again. The world is gorgeous, I want to go out and explore it untethered. 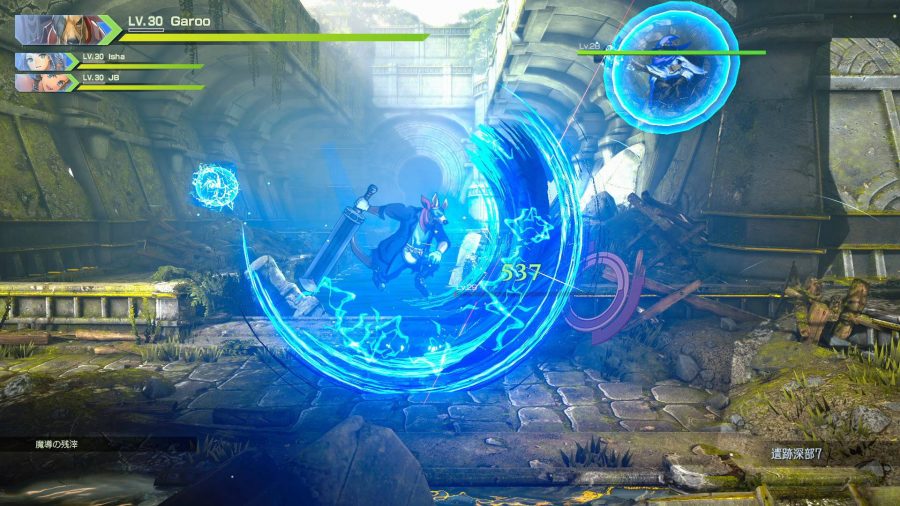 The relationship between exploration, combat, and town building should feel symbiotic. Instead, the town feels like a rope just waiting to draw taught and pull you back to the beginning, only loosening its distance slightly once every couple of hours. The tasks should all just pop up immediately, letting you choose when to engage with different people. While also, the map could be a lot bigger, and offer more variety instead of simply walling off areas and forcing you to go down a single pre-destined path each time.

I’m not saying I didn’t have any fun, the combat is just mindless enough that I can relax while button bashing, and the simple task of picking up loads of resources and heading back to town still fired neurons in the most basic part of my monkey brain. This is probably a perfect podcast game for anyone determined to give it a go. But the execution around it feels so poorly thought out and artificially hampered. You even start out with a painfully small resource bag, just another way to kneecap the fun before you even have a chance to actually enjoy anything. 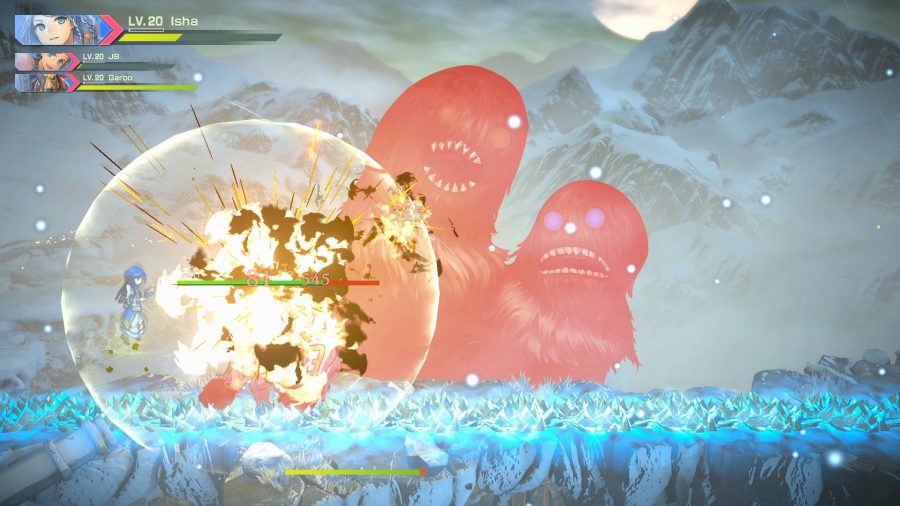 Finally, Eiyuden Chronicle: Rising has a poor UI that really doesn’t help things. Quests are given very vague descriptions that can cause you to wander aimlessly, the fast travel is needlessly limited to only certain areas, weapon mechanics are weirdly buried in layers of different menus, and the text is tiny with zero options to enlarge it. I don’t want to sound like there’s nothing of value here, as there’s some charm and enjoyment to be found if it’s your sort of thing. Perhaps in a year from now when Hundred Heroes is released, this will work better as a companion piece and another way to visit these characters. But right now, it’s only given me doubts about the upcoming RPG. 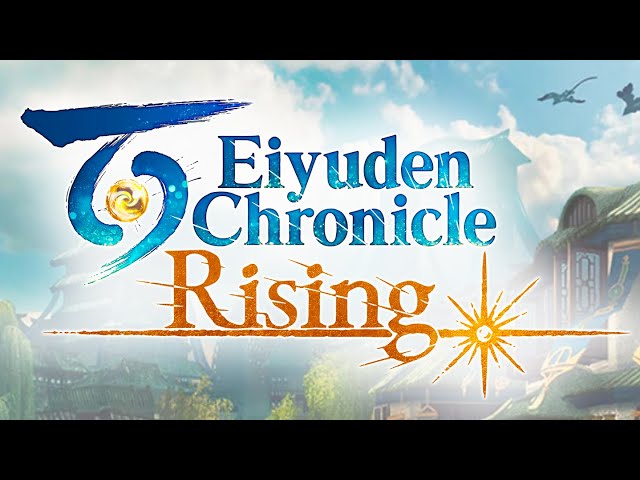 As a game on its own, Eiyuden Chronicle: Rising is a mixture of good ideas, beautiful visuals, and poor execution. I really thought I would enjoy the gameplay from its description, but instead, I sat there ticking off all my biggest gaming sins in a row, watching them sap the enjoyment out of an experience I wanted to love. The disparate gameplay elements rob the title of any cohesive sense of fun, and more than anything I’m disappointed that so much potential seems to be wasted by death by a thousand cuts of poor game design. I certainly hope Eiyuden Chronicle: Hundred Heroes is more impressive than this.