As Tom Cochrane once blood, “life is a highway, I want to ride it, all night long”. Obviously, Tom hadn’t been playing Mini Motorways, otherwise, he’d have barely been able to pull himself away from his Switch for long enough to even mutter the line in the first place. Instead, he might have found himself like I did, confused at 3am, wondering how he was still drawing new routes through Rio De Janeiro.

It really is just that engaging. I’ll get that out of the way before digging into the nitty-gritty. If you played Mini Metro, the previous transport puzzler from Dinosaur Polo Club, then you probably know what to expect, and allow me to tell you that once again the developer delivers. With a title that strips away any shoe-horned attempt at narratives and any complex mechanics that take weeks to learn, what remains is an accessible and engaging experience. Everything a good puzzle game should be.

The basic premise is similar to that of Mini Metro, in that you take on the role of a civil engineer to build connections between houses and institutions. The trick is, in that those who live in yellow houses need to go to yellow buildings, those who live in green houses need to go to green buildings, and so on, creating a gameplay loop that’s simple in execution, with plenty of room for scope.

Progression through each level is marked by the number of completed trips through your city’s infrastructure, usually needing around 300 or 400 on each to unlock the next level, or 1,000 to unlock each map’s challenge mode. The challenge mode is similar to scenario modes you find in tycoon titles like RollerCoaster Tycoon 3, or Prison Architect, giving you extra resources, or including new obstacles like immovable trees, while you try to achieve a certain goal. 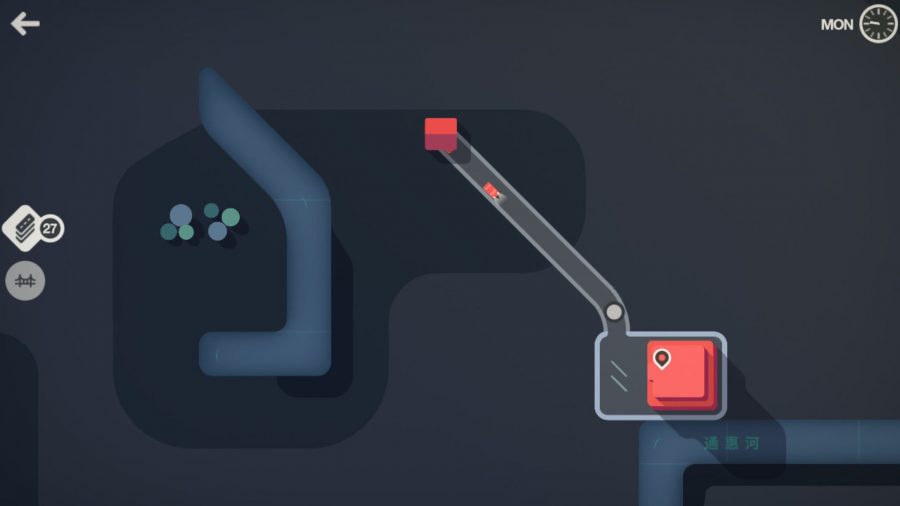 This is all in addition to the weekly and daily challenges offered out by the development team, meaning you can trade-in your daily Wordle to instead take half an hour to re-jig the roads and highways of Wellington, Warsaw, and others. I will say though, that these challenge modes do live up to their name, and you’re better served getting your head around the primary mechanics, which are surprisingly deep, and unlocking new maps before putting yourself through the gauntlet.

In terms of mechanics, Mini Motorways really hits the nail on the head

The overall design of Mini Motorways very much plays into the zen-like puzzler concept at the core of the game’s raison d’etre. As should be the case with a good puzzle game, the simple road, buildings, and cars (essentially all of your resources) that begin to litter the screen by the latter stage of a mission are all easily identifiable, leaving only yourself to blame if you begin to feel overwhelmed in the latter stage of a mission.

The cities you find in Mini Motorways are all cultural hubs or capitals, like LA, Tokyo, or Beijing, but the payoff for including them is mixed. The positive is that it adds a niche element to each mission, teaching you a little about the geography of famous locations, as well as individualizing each challenge with either a need for bridges, tunnels, or highways. 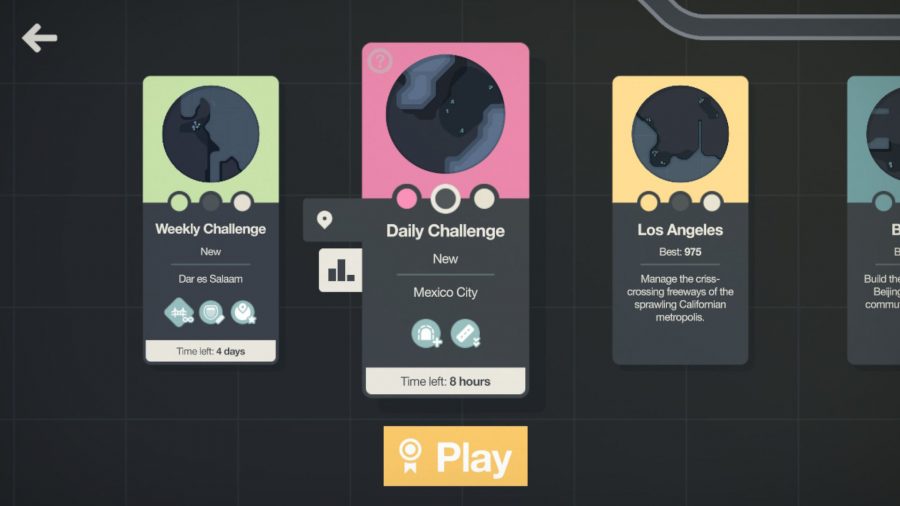 However, I feel like there could be a little more charm in the cities included, or some cultural nods to the more famous towns and cities rather than purely lending geography. I hate to break this to big geography fans, but it’s not the most popular interest, and I personally couldn’t tell apart a majority of the cities from Mini Motorways just from the bodies of water they hold.

In terms of mechanics, and the gameplay loop I mentioned earlier, Mini Motorways really hits the nail on the head with its intelligent difficulty curve. While all levels start out as simple single-road solutions, by the time you’ve hit 500 trips on any particular map, the challenge starts to build, and precious resources like bridges, roundabouts, and especially highways, go from being nice customization and organization options to vital mechanics. 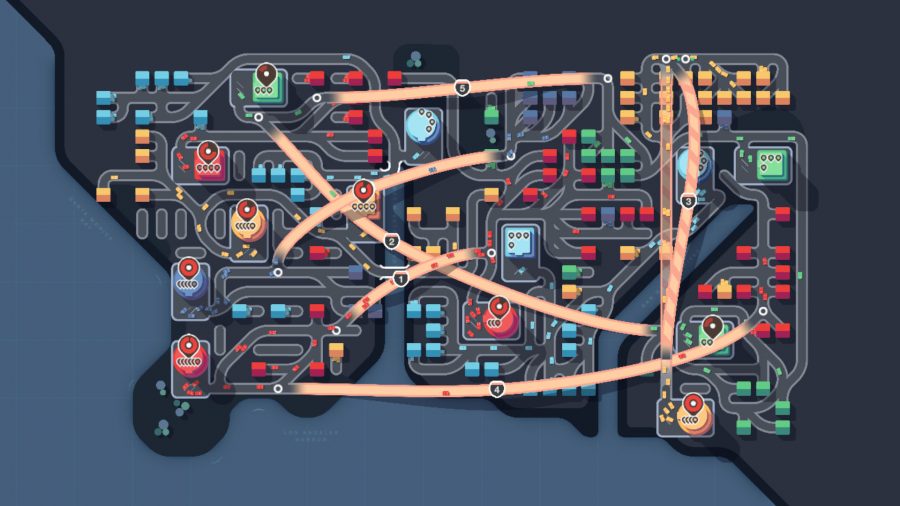 It’s in this reliance on just a few reliable gimmicks, for lack of a better world, like roundabouts and highways to affect gameplay that Mini Motorways hearkens back to the early days of mobile puzzle gaming. There’s no option to part with your pennies for a quick fix, like the reams of Candy Crush power-ups, putting a real emphasis on resource control that falls bang in line with Mini Motorway’s dictionary definition difficulty curve.

The UI behind Mini Motorways is intelligent, with plenty of customization and accessibility options, including night mode, a must-have for a game with so many bright tones. I do have one bone to pick with the menus and system mechanics though, you seemingly can only work on one map at a time. This can be frustrating when you’re having difficulties with a map, and fancy a pallet cleanser but don’t want to lose your progress, as you can only either keep on truckin’ or start a new in a fresh location.

Fortunately, the design is such, so that, unlike transport tycoon games where you might spend an hour in one convoluted menu, you can easily complete 300 trips, potentially even the 1,000 needed to unlock challenge modes, within a single sixty-minute sitting. So even in the moments when I wasn’t keen to give up a slightly tricky 800+ trip run, I knew it would be easily achievable to get back to that state, it’s just that I’d prefer to be able to jump right back in. 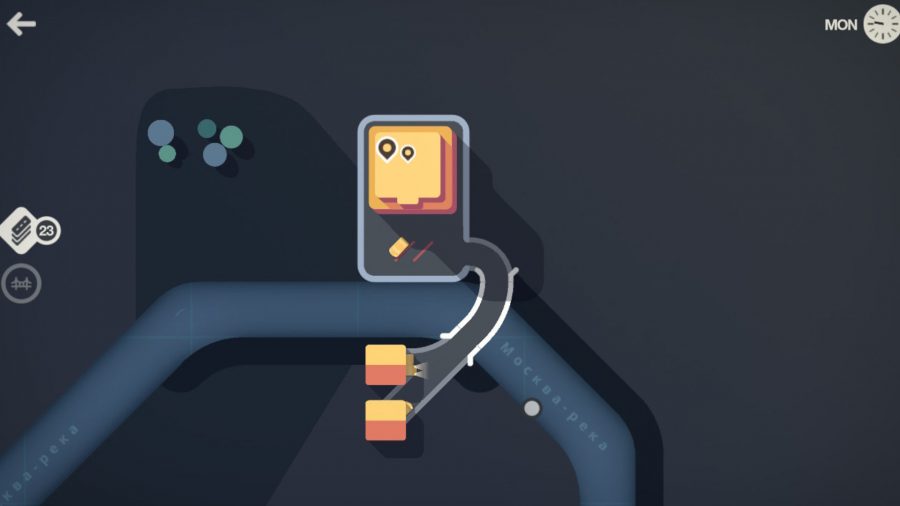 Switch performance is, as you’d expect in all honesty for a game with simplified graphics like this, absolutely bang on the money. There’s no discernable difference between playing it on Switch or mobile, besides of course Joy-Con controls which as a touch-phobic gamer I’m happy to report are intuitive, with different control options depending on your preferences. I did test the touch screen controls for the purpose of this review, and again I’m happy to say, they’re responsive, articulate, and tactile.

Above all else, Mini Motorways is incredibly playable. It’s one of those games that reminds my pretentious narrative-first sensibilities that sometimes a game can just be fun to play, or it can challenge the mind, without shoe-horning in a tepid plotline. Personally, I can’t wait to see what Dinosaur Polo Club has up its sleeves in the continuation of their mini-series, but until then, I’ll be up until the early hours trying to reposition roundabouts for maximum effect, and absolutely loving it.