Grass Pokémon are the originals, the earth that grounds the series. Go find a Pokedex (I’m sure you have one to hand) and look at the very first Pokémon, who is it? Yeah, that’s right, it’s my boy Bulbasaur! Back before western territories decided that grass wasn’t cool, Japan even got Pokémon Green on the Game Boy instead of Pokémon Red. Stupid fire, it kills people, and that’s lame.

In Pokémon Go they also fulfill an important role, as you’ll come up against some bulky water and rock types that simply cannot withstand the awesome power of a solar beam. Sorry Tyranitar, ya basic. So what are the best grass pokemon in Pokémon Go? Well, thankfully you’ve got plenty to choose from, as these adorable little dudes are all around the world. Climbing up trees, jumping around in fields, crawling out of… moss.

This list goes into the best Pokémon to add to your team, the best moves to have, and why. I’ve tried not to just include my favorites (I’m so sorry Tropius my love, you’re just awful competitively), and while there are a couple of legendary or mythical Pokémon, most of these you can obtain through regular play. If you need a bit more help after this, be sure to also check out our Pokémon Go guides covering the best electric Pokémon, fire Pokémon, and dark Pokémon.

Let’s go into the long grass, and uncover some of the best grass Pokémon in Pokémon Go. 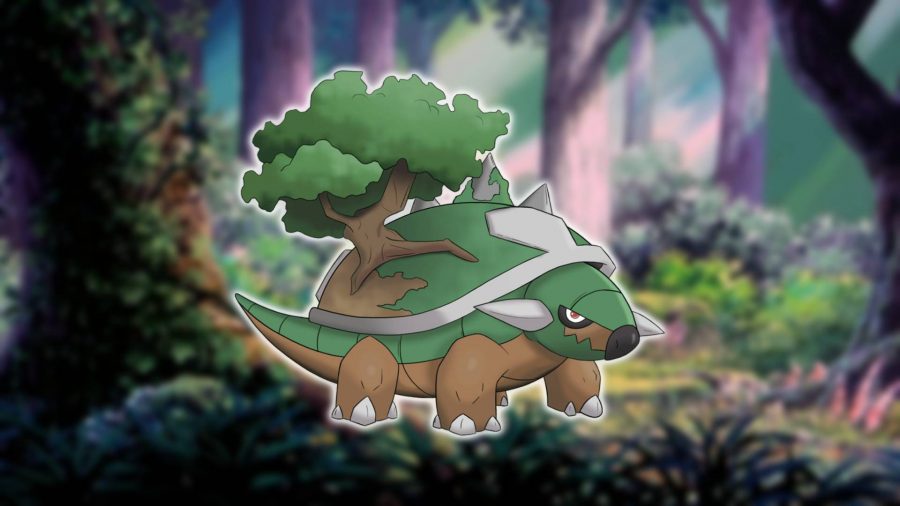 Watch out, the big boy is on board. We love Torterra, the tree-carrying turtle who draws inspiration from the old idea that the planet existed on the back of a giant turtle. It’s got trees coming out of its back, which, personally, would cause me no end of spine problems. Befitting of its size, Torterra is a beefy beast that can take quite a few hits, especially with its joint grass and ground types providing it resistance to ground, rock, and electric.

This guy is essentially designed to ruin Tyranitar, and if you have access to frenzy plant that’s definitely the way to go. Frenzy Plant was a community day move, so if you evolved an old Torterra back then, you may be in luck – or you can use an elite TM instead. 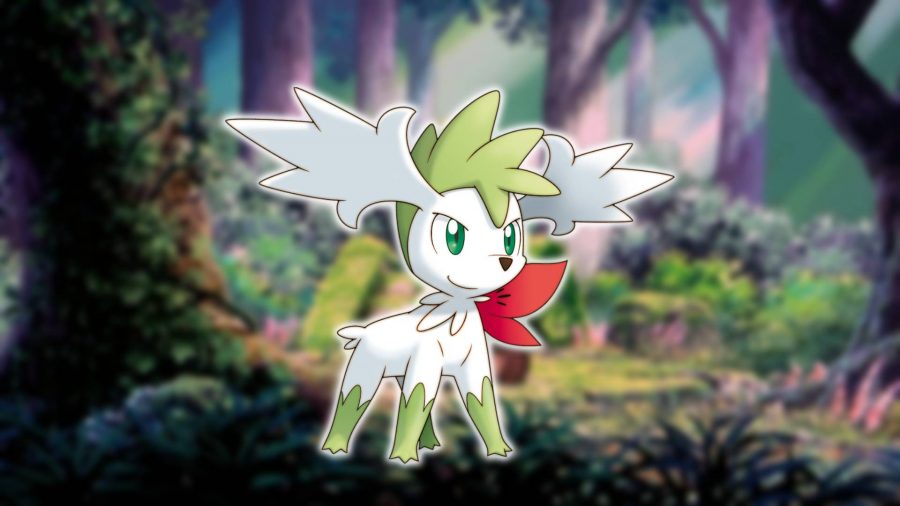 This adorable little hedgehog Pokémon also has a second form, the ‘sky forme’, that mixes its stats and makes it look like… a little grass dog? Anyway, Shaymin sky form gains the flying type on top of its grass typing, giving it a mixture of resistances to fighting, water, grass, and ground.

Shaymin has a high attack stat of 261, which, when used with solar beam, makes Shaymin a bit of a glass cannon as its other stats aren’t quite as impressive. Still, the joint grass and flying types make it a perfect way to counter Pokémon like Swampert, but you should try to avoid ice types as they can easily take Shaymin down. 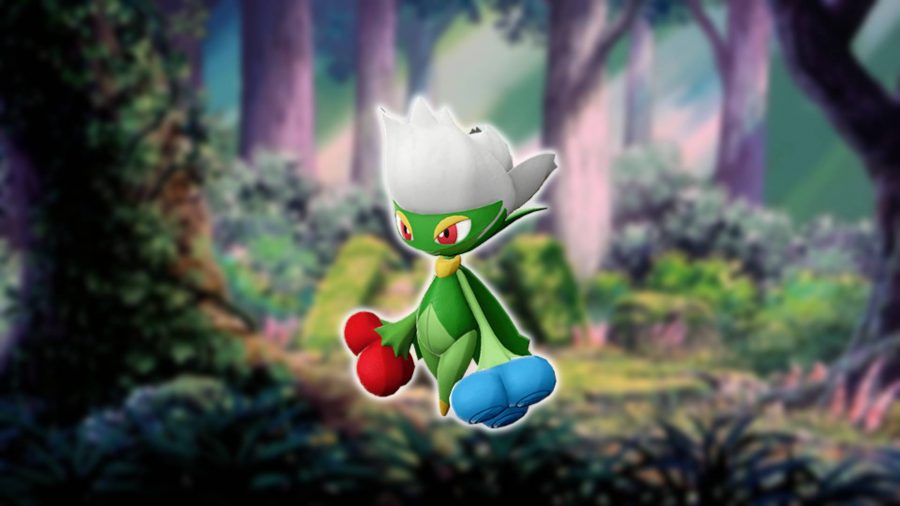 A fantastic mixture of grass and poison means that Roserade has five resistances, covering fighting, water, electric, fairy, and grass. This makes Roserade a great choice against Pokémon like Lanturn, and bulky threats like Mega Blastoise.

Mixing grass and poison moves also help make the most of the stab bonus, but you still have to be careful of common psychic threats like Mewtwo. Roserade also has a cool shiny, changing the color of the flowers it holds to black and purple instead of red and blue. 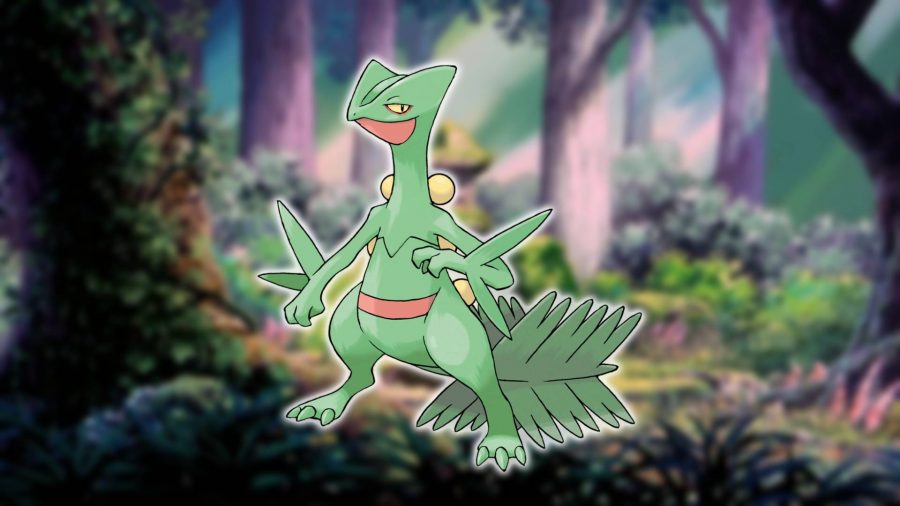 Good old Sceptile takes us back to the days when starters still evolved into single type monsters. Pure grass is great against ground, water, and electric, but still leaves you open to very common threats like fire and ice.

Still, its great attack stat and frenzy plant make it a good fit to take on Rotom (wash), Quagsire, Swampert, and huge threats like Mega Gyrados. That stab on frenzy plant especially makes it a move that opponents really want to avoid. I’ve always liked Sceptile’s lizard design, and while normally green, its shiny form is a really nice shade of bluey-green that I love. 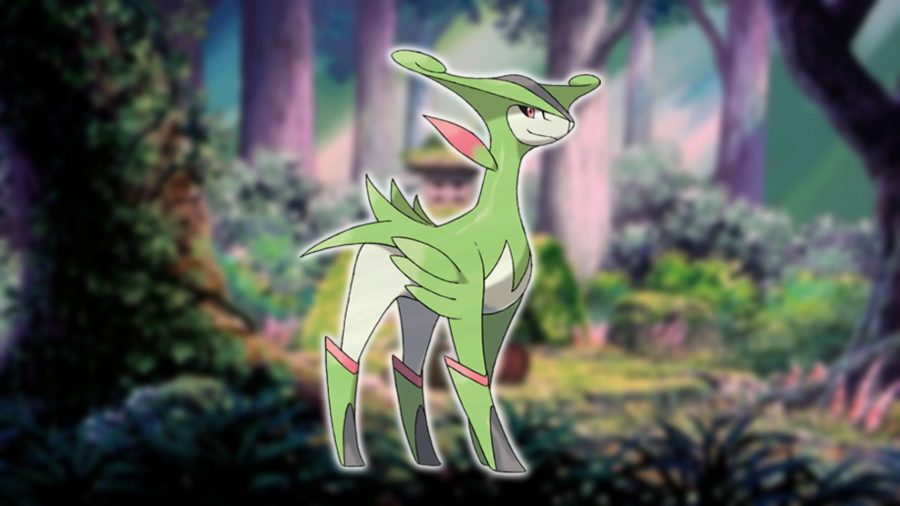 Now grass and fighting is an interesting combo, and one that Virizion utilizes well, giving it resistance to ground, rock, water, grass, electric, and dark. This is another Pokemon absolutely perfect for taking out threats like Tyranitar or Garchomp.

It’s also quite bulky, so with good defense Virizion can stand up to threats with huge HP pools like Blissey, or Mega Kangaskhan. This is one only found in raids, so keep your eyes peeled and look out for all the latest announcements. Also if you’re extra lucky, Virizion has an awesome bright red shiny, but good luck with that! 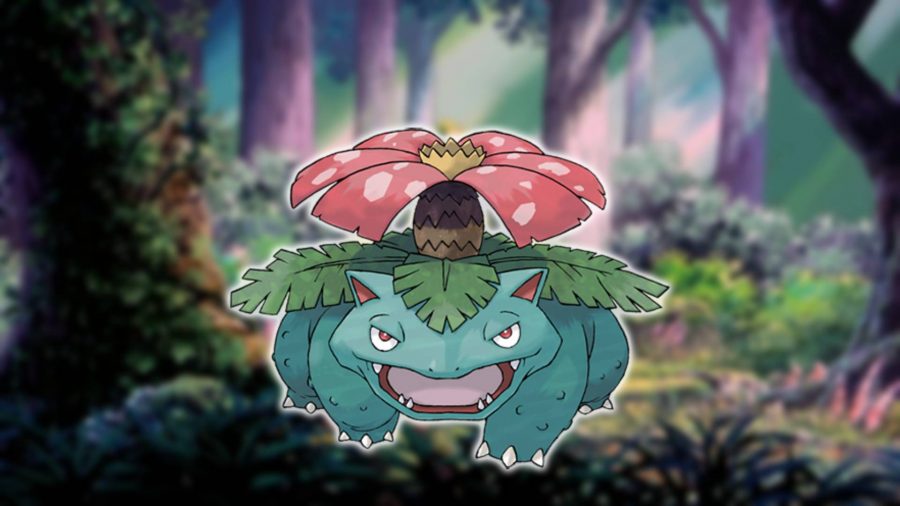 Yup, another Pokémon that uses frenzy plant with stab well – and combining this with its well-rounded stats makes Venusaur a menace to water types everywhere. That grass poison typing is great for resistance, and Mega Venusaur packs a real punch if you can use them. Tricky ‘mon like Swampert and Quagsire won’t last long if you have the right stats, and even the mighty Ryhperior doesn’t have much to counter you.

Venusaur is one of the very first Pokémon, number 003 in the Pokédex, and it holds a place in the heart of many trainers who grew up with Bulbasaur and the gang. We wish its shiny was a little bit cooler though, as it just seems to be a slightly brighter shade of green. 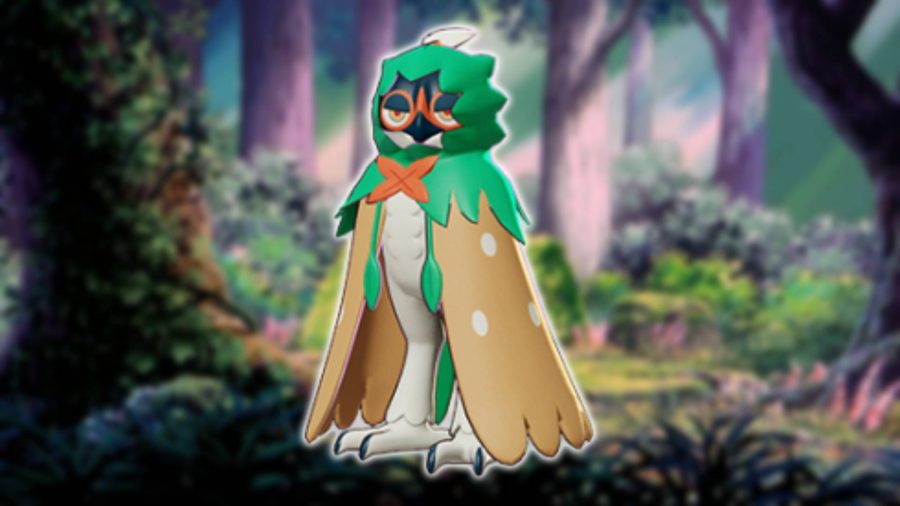 The adorable owl Rowlet evolves into this cool, grass and ghost type, with a Robin Hood-esque design and arrows made out of feathers. That grass and ghost typing makes Decidueye a real threat to water types, and especially effective against water psychic types like Golduck.

Even bigger threats like Suicine will struggle against Decidueye, and with 210 base attack, if you use Energy Ball with the stab bonus, this Pokémon can really hit hard. Alola Pokémon are more frequent in Pokémon Go at the moment, so this is your time to train the perfect partner – and if you’re lucky you can get your hands on the very aesthetically pleasing shiny version with its dark color palette. 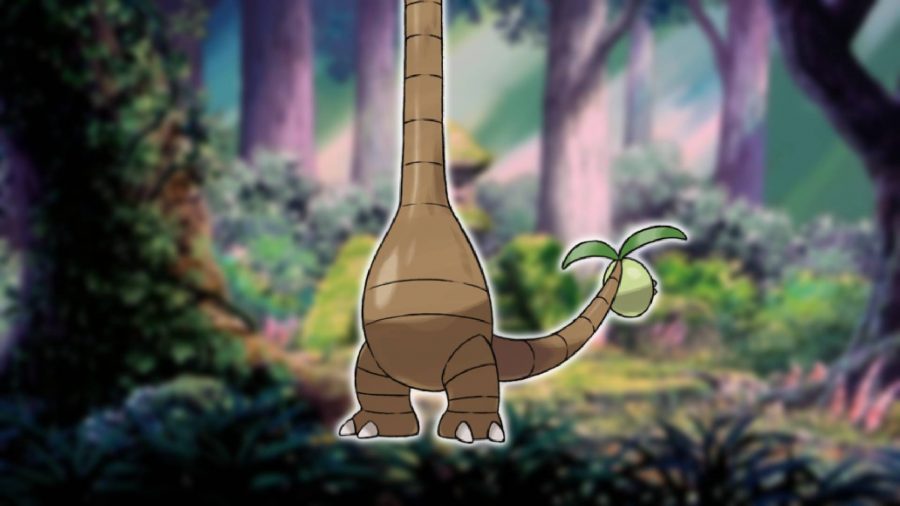 Possibly the tallest Pokémon to ever exist, Aoloan Exeguttor shows what happens when the Pokémon moves to warmer temperatures and gets all the sustenance it needs – it grows bloody massive. Its really interesting mixture of grass and dragon types sadly gives Exeguttor more weaknesses than resistances, especially to common threats ice, dragon, and fairy. Still, it’s got a base attack stat of 230 so with enough training those charged moves can hit hard.

The best way to use Exeguttor is against other dragon types, and you should go with Draco Meteor if this is your plan. Even bigger threats like Mega Amphoros, Haxorus, and Mega Latios need to be careful against this giant egg creature. Also, we really love its design, and it has a fantastic shiny as well, with gorgeous autumnal red leaves instead of the regular green. 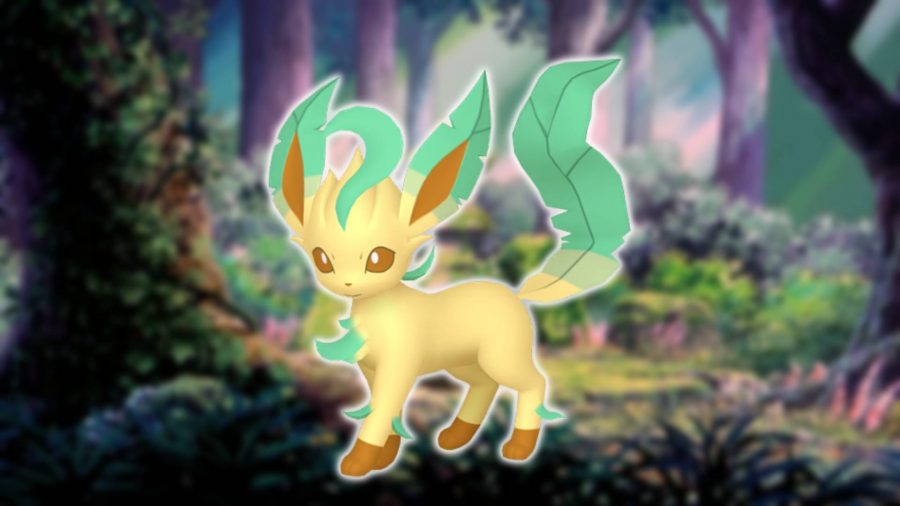 One of the many evolutions of Eevee, Leafeon was introduced in Pokémon Diamond and Pearl. They must have been running out of development time towards the end as they clearly only have five seconds to name this one. Being pure grass type is never ideal, but does leave it resistant to ground, water, grass, and electricity.

Leafeon has fantastic rounded stats and great defence, so it’s much bulkier than its tiny frame might suggest. As always, this makes it a great choice to defeat water types such as Lanturn, Rotom (wash), Quagsire, and that pesky Swampert. 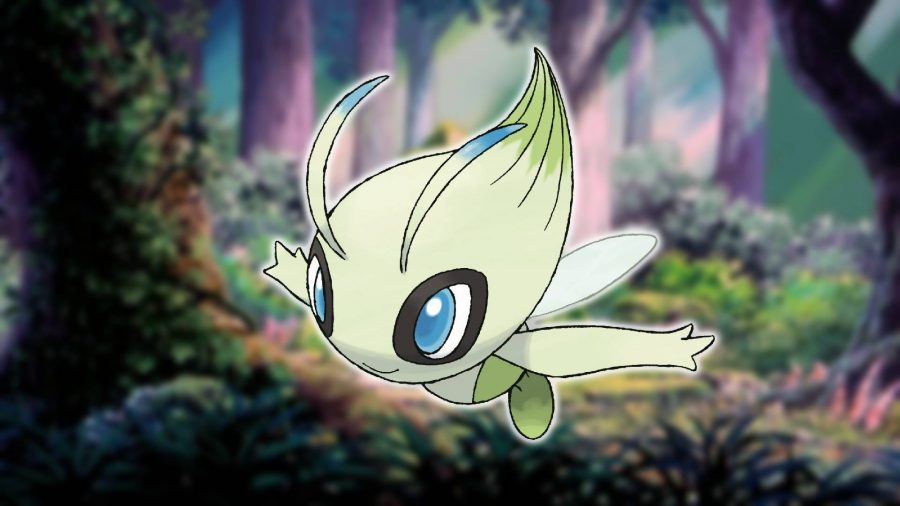 Following on from the mythical mew in the original generation, Johto introduced the guardian of the forest Celebi. Dual psychic and grass types makes Celebi a decent counter against opponents like Rhyperior, Mega Blastoise, Suicune, and Milotic. Its great, balanced stats across the board means it can take a couple of hits, which you’ll need thanks to its huge weakness to bug. Be careful of Volcarona, as that thing will destroy a Celebi in seconds.

This is another one locked behind raids, but it pops up fairly regularly, so just keep your eyes peeled. It also has a really lovely shiny that takes on a pink and purple hue that makes Celebi look so much like a red onion, it’s actually hilarious. We still love him though.

There you have it Pokémon masters, that is our guide to the best grass Pokémon in Pokémon Go, helping you to lay waste to all those water types out there causing you trouble. For even more great guides, be sure to check out the rest of our Pokémon Go coverage, with guides to the best electric Pokémon, fire Pokémon, and dark Pokémon as well.