Crash Bandicoot games are part of why I love gaming so much. The wumpa-loving marsupial had a huge role in my childhood, be it watching my parent play the first game, or it being gifted to me for my birthday one year – Crash is the first-ever game I played on my PlayStation. To top it off, to this day, Crash Bandicoot 3: Warped remains one of my favourite ever titles.

But in a franchise that has as many games as this videogame icon, you can’t help but wonder, what are the best Crash Bandicoot games? Well, you’ve come to the right place, as I went on a journey, one where I could hop, skip, jump, and spin my way through many levels to determine Crash’s finest outings on Nintendo Switch and mobile.

Anyway, it’s time to spin, slide, jump, and smash many crates with our list of the best Crash Bandicoot games on Switch and mobile. 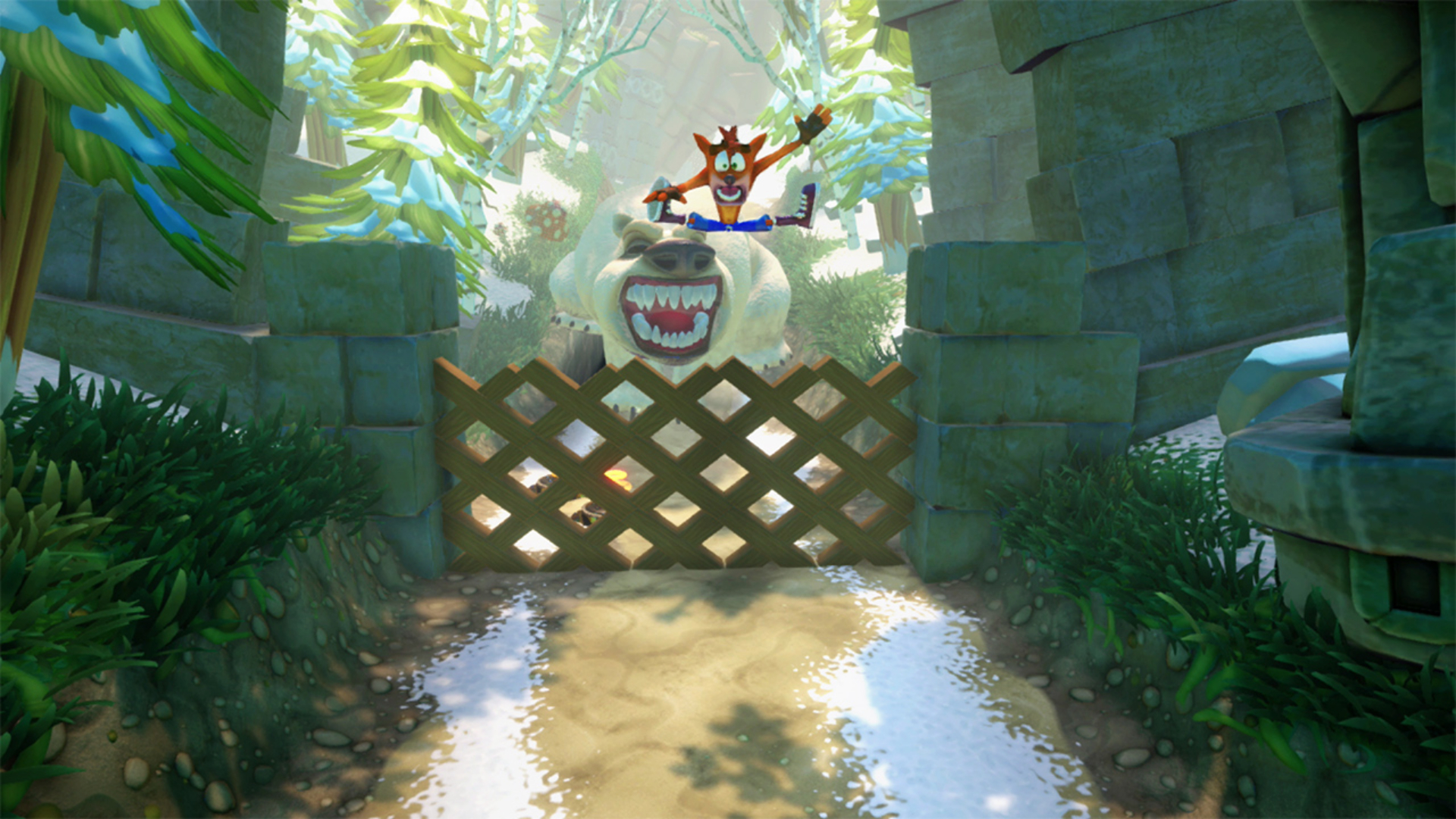 First of all, you have to be N. Sane not to enjoy this delightful trilogy (looking at you, Ben), it’s a throwback to your childhood, and the nostalgia it induces is real, albeit a little frustrating, as you ask yourself whether the games were always this difficult.

The first game in this collection is Crash Bandicoot, the title that started it all back in 1996, and is still known as one of the best platformers out there. In essence, Crash Bandicoot is PlayStation’s response to Sega’s Sonic and Nintendo’s Mario. Of course, while the trilogy was originally PS only, the remaster is on various platforms, because we should all get to experience the greatness. Besides, the first game has some memorable bosses, such as Pinstripe, and we all know how much I love a good boss.

The second game, Crash Bandicoot 2: Cortex Strikes back, takes everything that makes the first game good and builds upon it. For example, this is where the famous warp room makes its first appearance, the level design is so much more diverse, and Polar makes his debut. That last point is reason enough to play this game.

Finally, the last game in the trilogy is Crash Bandicoot 3: Warped, and it’s my favourite by a mile, so much so I don’t even mind when crocodiles eat me, mummies hug me, or when I lose my pants in Agrabah. The game sends you to different time periods, it has one of the best Crash levels ever, and Orient Express – you get to ride an adorable tiger, known as Pura, across the Great Wall of China, and if that doesn’t win you over, I think it’s time you left. 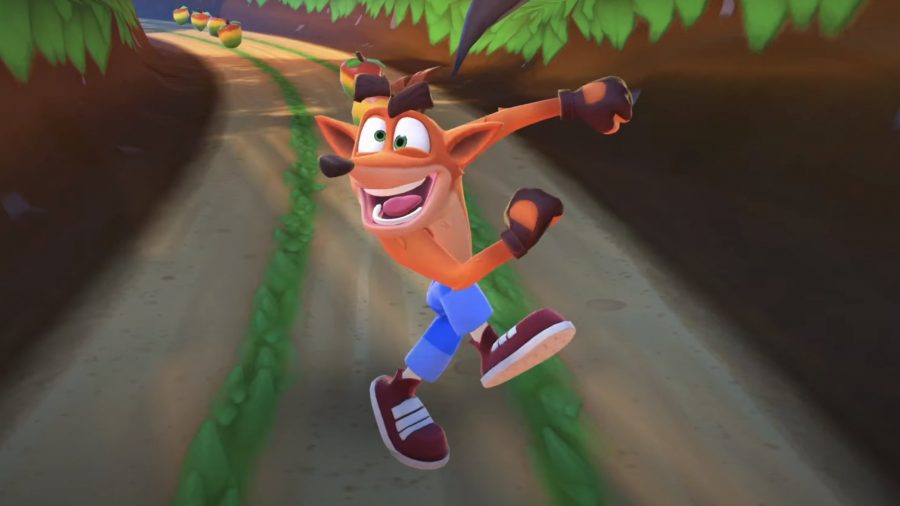 Crash Bandicoot: On the Run – mobile

There’s been a few Crash Bandicoot mobile games over the years, but sadly, many of these are lost to the annals of time. However, King came to our rescue in 2021 with the release of Crash Bandicoot: On the Run, an endless runner that allows the marsupial to run off all those extra wumpa fruits that he eats.

The gameplay is simple, swipe left and right to change the lane Crash or Coco are in, avoid obstacles, break boxes, collect wumpa fruit, and sometimes face a boss at the end. There isn’t too much more to say about it, other than that it’s great to experience popular Crash Bandicoot levels in an all-new way.

We do have a Crash Bandicoot: On the Run review if you want to know more. 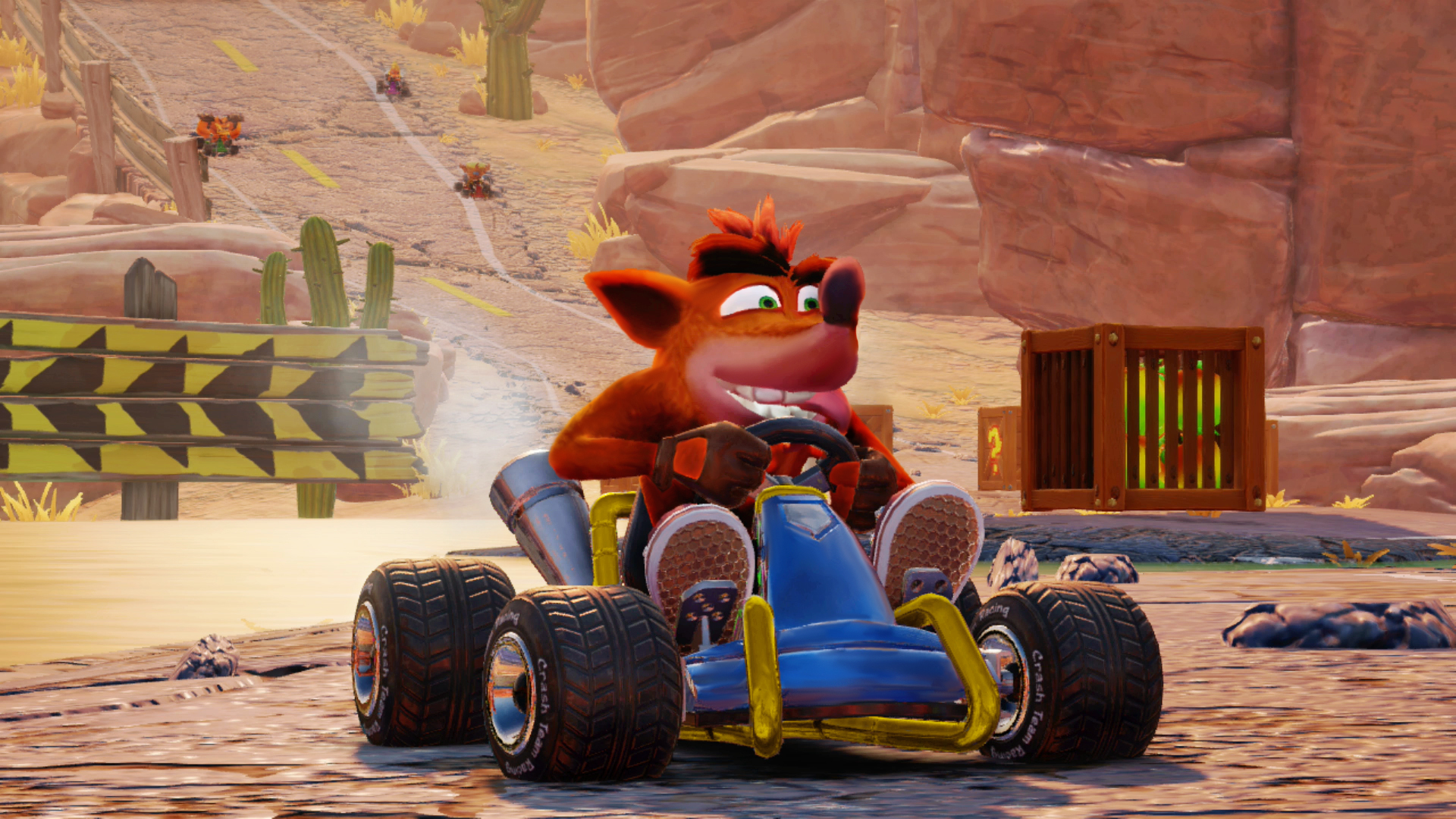 Start your engines for another fantastic Crash Bandicoot game, and what I consider to be the best kart racer out there – you can’t change my mind, don’t even try. The game is a remaster of the original CTR from 1999, but it also includes content from Crash Nitro Kart and Crash Tag Team Racing – the fact only CTR got a remaster is sacrilege. I would appreciate a turbo trilogy.

As with any spin-off kart racer, you get to select a character and take them through the campaign. However, unlike the original, you’ve got customisation options in Nitro-Fueled, and can switch between characters, vehicles, and racing styles at any time. Now get out there, and make them all eat your dust.

If you’re after similar games, make sure you pull over to our lists of the best Switch racing games. 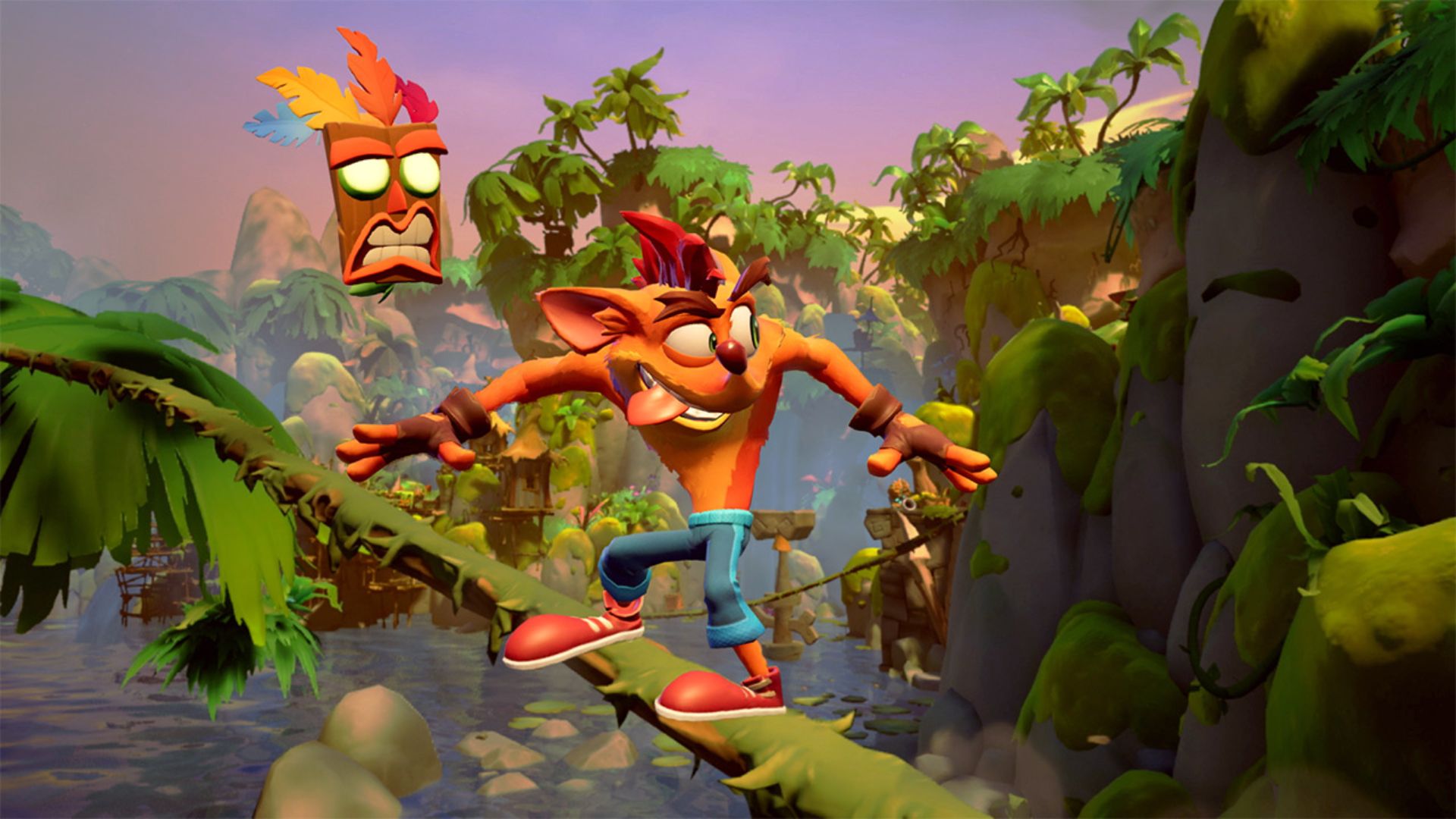 Well, upon the release of this game in 2020, all I could think was, ‘it’s about time,’ the wait for this title was long. Yes, I enjoy the N. Sane trilogy and CTR Nitro-Fueled, but the need for a fresh Crash Bandicoot adventure was strong, and finally, thanks to Toys for Bob, the marsupial got another outing, and what a treat it is. By treat, I mean a rage-inducing experience that makes you question whether the game is harder than the originals, or if it’s your gaming skills deteriorating.

Since I refuse to accept my games prowess is declining, it’s clearly the first option. However, the game’s difficulty is part of its appeal. Does this make me a hardcore gamer, a masochist, or a little bit of both? I’m not sure, but the incredible level design in Crash 4 certainly means it’s easier to work your way through the same environment over and over again. Oh, and how can I forget to mention the names of the levels like Ship Happens – it really does Crash, it really does.

Furthermore, the story does us all a favour, as it picks up from the end of Crash 3 Warped. That’s right. There was no new mainline Crash game between 1999 and 2020 – what a long and painful wait. Anyway, the story is fantastic, and not only do you get to play as Crash and Coco, but their archnemesis too, Dr Neo Cortex. The fact you can also play as Tawna and Dingodile is a bonus.

I do feel the need to give a little shout out to Pura though, I don’t think I got to see enough of Polar either, but hey, at least the bear made an appearance. The tiger, meanwhile, is lost to the mists of time. 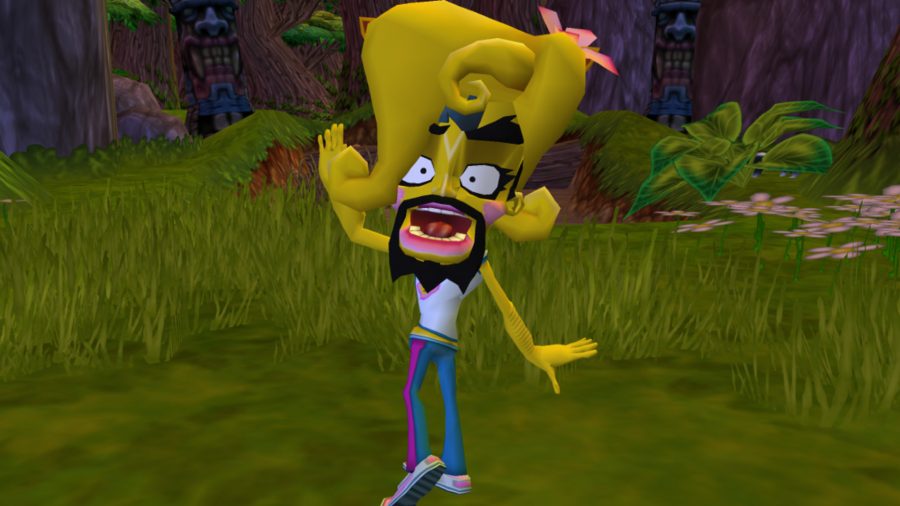 Okay, Crash Twinsanity isn’t on the Switch or mobile, obviously, the 2004 title is on PlayStation 2 and Xbox, but I feel it’s due for an upgrade. Of all the Crash games that could get the beauty treatment, I honestly think it should be Twinsanity. What a treat it would be to play this game on the go.

It’s bonkers. From the get-go, you follow Cortex as he parades around dressed as Coco – he’s so convincing that I honestly think he should consider a career in drag – then, when you finally reach him, you both go tumbling through a cave system, fighting all the way, and that sets the tone for the rest of the game.

Crash Twinsanity is as comedic as it is unconventional, with the gameplay, levels, characters, and soundtrack all playing a part in why it works so well. So, for my own sanity, give me Crash Twinsanity on Switch – I need it!

There you have it, the best Crash Bandicoot games on Switch and mobile. If you’re after similar titles, hop, skip, and jump your way over to our list of the best Switch platformers – or don’t, we can’t tell you what to do. If we could, every member of the PT crew would like the marsupial in shorts.